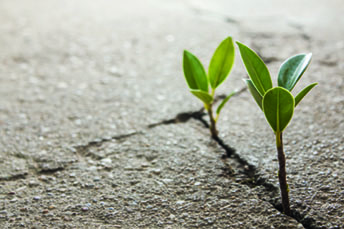 Concrete is traditionally made by combining cement with sand and gravel. Cement is the key ingredient in this type of concrete and unfortunately requires high temperatures and large amounts of energy to produce. Because of this traditional concrete contributes to between 5-8% of the greenhouse gas emissions worldwide. This is a phenomenal amount as it is used in just about every construction project in modern society, from buildings to roads, it’s everywhere. Therefore there have been numerous studies trying to reduce this contribution.

Over the last five years there have been numerous studies to produce a self-healing concrete that is sustainable. A concrete that can repair its own cracks would mean it would not have to be replaced as often. Therefore lowering the amount needed to be produced over the long-term. This would, in turn, lower both production emission and cost of repairs. Most recent studies have tested the effects of adding encapsulated polymers, small capsules inside the concrete that will break open when a crack appears and release the contents so that it may fill the gap.

A variety of different agents have been tested in these capsules and one very recent study has even been testing the effects of fungi. The study proposes that fungal spores, together with nutrients, is added during the initial mixing process of new concrete structures. It works similar to other encapsulation methods, as it releases the spores so they can germinate as the concrete cracks. Then, as they grow they work as a catalyst within the concrete’s calcium-rich conditions to promote precipitation of calcium carbonate crystals that fill in the voids. Once the cracks are completely filled, no more water can enter and the fungi will again form spores. Should cracking start again there is the chance, should conditions be favourable, that the spores would even repeat the process. So unlike the other capsule methods, this one is potentially sustainable for an even longer time.

Alternatively, to repairing concrete, other researchers have begun testing alternative binding materials. Therefore, either lowering the amount or completely removing cement from the mixture. One such study at the Washington State University has been studying the effects of adding Fly Ash to the mix. Fly ash is the material that remains after coal burning, a huge waste management issue in the United States. Unfortunately, over 50% of fly ash ends up in landfills, where it is capable of easily leaching into the soil and affecting the local environment.

While many other studies have tried using fly ash as the binder in concrete, this is the first one where it has not required heating or the use of any cement in the material. This innovative solution tackles two of the major environmental problems at once.  It makes use of the coal production waste while simultaneously removing cement from the concrete production. The concrete developed during the study has shown to be strong and durable concrete. The researches are using nano-sized materials, engineering the concrete at the molecular level.

The processes use graphene oxide, a recently discovered nanomaterial, to manipulate the reaction of fly ash with water and turning it into a cement-like material. Not only is it strong and durable, the material is also designed to be pervious. This means that water can pass through it to replenish groundwater while simultaneously mitigating the potential of flooding from heavy rainfall. The material is still under testing, but no doubt in time this may just be one of the biggest breakthroughs of the decade for the construction industry.

Overall these studies show amazing feats of engineering at a molecular level. Hopefully, these methods can be harnessed eventually on a large enough scale to be a sustainable alternative to traditional concrete and ultimately lower the construction industry’s environmental impact.