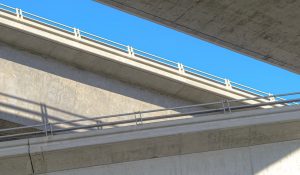 Concrete and steel, just like any other materials, don’t have infinite lifespans. In fact, most projects are built to withstand only around 100 years, but tend to last longer thanks to ongoing inspections, repairs and upgrades. However, thanks to recent developments, it is becoming more and more clear that climate change is starting to have a considerable impact on the lifespan of these structures.

Environmental changes can have a profound effect on the lifespan of materials used in structural projects. As such, the surrounding environment is always taken into account throughout the design process of bridges, buildings or dams. Considering changes in temperature and humidity levels could prolong the lifespan of the materials, minimise repair costs and allow for successful inspections down the track. But with climate change affecting the stability of these elements, how will infrastructural projects contend?

Atmospheric carbon dioxide (CO2) is a major cause of reinforcement corrosion in all building types, including bridges, wharves, dams and other structures, not only in Australia, but around the world. The increase in the levels of CO2 in the atmosphere that is associated with global warming, is more than likely going to have a direct effect on the longevity of current and future infrastructure. Research conducted by the CSIRO, suggests that the carbonation-induced damage risk is likely to increase by over 400% over the next 80 years in Australia, due to the projected local temperatures and relative humidity changes. The corrosion damage is likely to reduce the lifespan of the structure, therefore increasing the repair cost, over time. Furthermore, should these structures not be properly maintained, the cost could become more than just a monetary one, with the potential to risk lives in the event of a fatal infrastructural failure.

There have unfortunately been a number of recent dams and bridge collapses, and while some of these are still under investigation, many theorise that climate change, paired with lack of regular inspections, more than likely played a role. The increased carbon levels have already started to increase corrosion levels, and when infrastructure is not properly inspected and maintained it can lead to catastrophic results.

While increasing carbon emissions affect the reinforcement of concrete structures, there has also been research into the effect of increased temperatures. Studies have shown that even on expansion bridges in the US, that are regularly maintained, the expansion joints may not be equipped to withstand the unpredictable thermal stresses that could occur in the future as a result of global warming. For example, the Nanfangao bridge collapse in Taiwan that took the lives of four people, while only twenty years old, was based on an older plan that didn’t factor in the environmental changes we see today. According to this article on engineering.com, the expansion joints were found to be warped, and the cables were rusted and corroded. This highlights the importance of environmental considerations and regular maintenance of structures, as climate change becomes increasingly prevalent.

Research on the effects of climate change on reinforced concrete and steel structures, and their ability to withstand changes in the atmosphere such as increasing temperatures, is continuously expanding. The consequences of climate change and global warming continue to strain the infrastructural industry and could have detrimentally extreme effects on the lifespans of current and future projects, resulting in more catastrophic collapses.